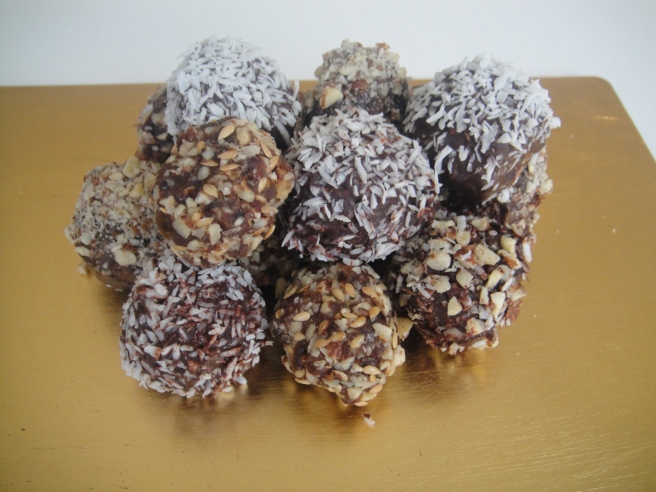 I’ve made a version of these healthy gym snacks before, but this is taking it to the next level. They are so easy to make it’s almost embarrassing! For me, the best part of these energy balls is the chocolate coating that I put on some of them. The coconut really lifts the richness of dates. The golden linseeds are full of omega-3 fatty acids, so you can feel virtuous as you eat these! They work out at about 133 calories per ball. The recipe comes the Waitrose weekly newspaper March, 2015.

To make the date balls

To make the apricot balls

To make the coatings 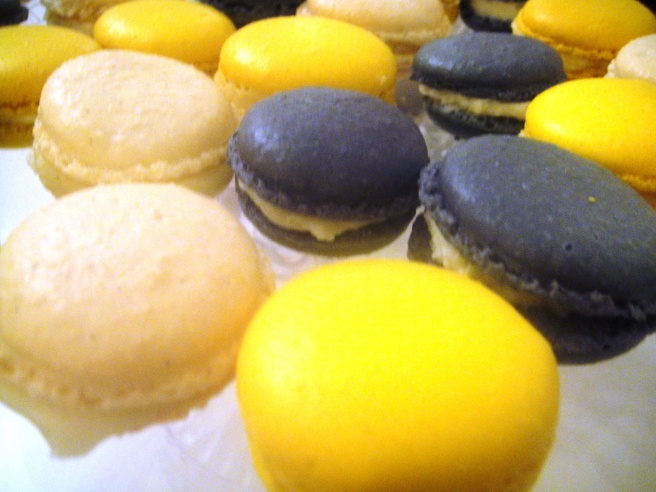 I wanted to bring something into work to celebrate my birthday. Rather than the usual birthday cake which would bring the focus on me, I wanted to make something that I could leave in our 3 different offices and let people help themselves. In previous years I’ve made cupcakes and mini cupcakes, but this year I decided to follow the macaron theme. I love these colours, spring colours, full of hope. These are the colours I see in my garden at this time of year. The purple macaron is lavender with a lavender cream, the yellow one is lemon with the most amazingly zingy lemon cream. The white one is vanilla with a white chocolate ganache filling. The recipes come from Pierre Herme’s Macaron book.  The lavender one is adapted from http://blahnikbaker.com/lavender-honey-macarons/.

I used Pierre Herme’s basic macaron recipe then adjusted the lavender essence so that there was enough to taste, but not to overpower. Be aware that these recipes require the egg whites to be aged for at least 3 days before you use them. Also the fillings should be made the day before as they may be too runny otherwise. It is also recommended that the macarons are left in the fridge for 24 hours. I just left mine over night and they were fine. The ones I ‘tested’ before refrigerating were also delicious.  I think everyone enjoyed the macarons; I know I did!

For the lemon cream

Make the lemon cream the day before

* Rinse, dry and zest the lemons

* Rub the zest and the sugar together.

* In a bowl mix together the lemon juice, the lemon and sugar mixture and the eggs. Tip this into a bowl over a saucepan of barely simmering water. Beat until the mixture reaches 83/84°C. Allow to cool to 60°C then add the butter cut into pieces. Whisk until the cream is smooth then use a hand blender to blend for 10 minutes.

* Pour the cream into a gratin dish. Press cling film over the surface of the cream. Set aside in the fridge until the next day.

The Next Day make the macarons

* Bring the water and sugar to boil at 118°C. When the syrup reaches 115°C, simultaneously start whisking the second portion of liquified egg whites to soft peaks.

* When the sugar reaches 118°C, pour it over the egg whites. Whisk and allow the meringue to cool down to 50°C, then fold into the almond-sugar mixture.

* Spoon the batter into a piping bag with a plain nozzle..

* Pipe rounds of batter about 3.5cm in diameter, spacing them 2cm apart on baking trays lined with baking parchment.

* Rap the trays on the work surface covered with a cloth to remove any air bubbles. Leave to stand for at least 30 minutes until a skin has formed on the surface.

* When out of the oven, slide the shells onto the work surface.

* Stir together the lemon cream and the ground almonds. Spoon the cream into a piping bag with a plain nozzle. Pipe a generous mound of cream on to half the shells and top with the remaining shells.

* Store the Macarons in the fridge for 24 hours and bring them back out for 2 hours before serving.

For the white chocolate ganache

* Follow the instructions for the lemon Macarons, but split the vanilla pod in two and scrape out the seeds and add them to the almond and icing sugar mixture.

To make the chocolate ganache

* Split the vanilla pods in two and scrape out the seeds with a knife. Stir them into the cream.

* Bring the cream to the boil, take off the heat then leave to infuse for 30 minutes.

* Chop up the chocolate and melt in a bowl of barely simmering water. Remove the vanilla pods from the cream. Pour over the melted chocolate a third at a time.

* Transfer to a gratin dish and leave to cool. When cool, spoon the mixture into a piping bag with a plain nozzle. Pipe a generous amount of ganache onto half the macaron shells. Top with the remaining shells.

* To make the Macarons, follow the instructions above. With a pestle and mortar grind the lavender add to the ground almonds and icing sugar mixture.

* Beat the butter until light and creamy.

* Add the rest of the ingredients and mix on low until combined. Increase the speed until medium and whip for an additional 2-3 minutes.

* When cool, spoon the mixture into a piping bag with a plain nozzle. Pipe a generous amount of ganache onto half the macaron shells. Top with the remaining shells.